Wasp nests are made of chewed wood pulp and saliva, giving them their unique papery walls. Nests are typically constructed in protected areas with easy access to the outdoors. Wasp nests are frequently found in wall cavities, roof spaces, beneath eaves, bird boxes, sheds, and garages. Learn all about them in this blog post!

How do wasps build their nests?

Wasps do not build their nests in the same way as bees do. Wasps have particularly specialised jaws that aid in nest construction, but they require outside chemicals to form the material that makes up their nests. Nests, of course, are generally employed by social wasp colonies, as opposed to numerous parasitoid wasp species that lay eggs in different ways.

In what location are you most likely to find a wasp nest?

When it comes to the location of where a wasp prefers to build their nest, it's all down to the queen wasp. The queen wasps fly out to select a good location for their nests. These areas might be places like overhangs, eaves, roofs, trees, and regions near decks and other structures. Areas where they can use corners or where two pieces of wood join together to attach the nest to a sturdy structure.

Wasps, like humans and other animals, want to build their nests as far away from the elements as possible, so anything that overhangs or gives protection from rain and other factors is their preferred location. to build a nest. Wasps build their nests high in trees and on roofs in order to avoid potential predators.

Queen wasps want warmth as well, which is why they may establish nests in wall cavities, attics, and in and around human structures such as homes, buildings, sheds, garages, and even backyard decks. The queen will discover this location and then use her strong teeth to scrape wood off logs, wooden constructions, and even cardboard. She then transports these materials back to the nesting location and chews them up, transforming them into a paper-like pulp that she uses to build the earliest elements of the nest. She lays eggs, hatching more workers who then begin scraping more wood, converting it into pulp, and expanding the nest until she can be encased within it and focusing on laying eggs to form the remainder of the colony. 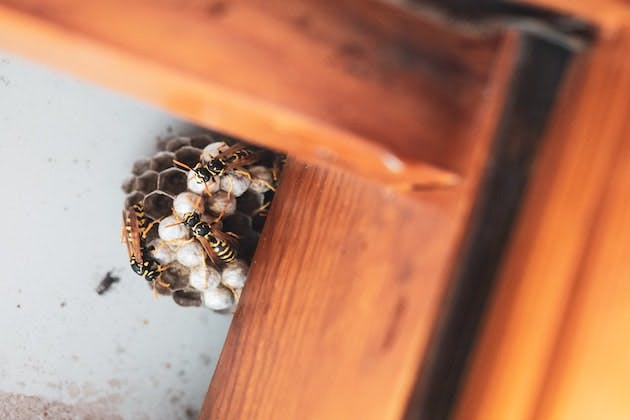 Are all wasp nests the same?

Different kinds of wasps build different kinds of nests. Paper wasps, for example, build the open, cone-shaped nests with visible honeycomb-like chambers that are commonly observed on porches and roof eaves. Yellowjackets and hornets make enormous, circular, enclosed nests with a tiny entrance towards the bottom through which the workers enter and exit. These may grow fairly huge and can be found in trees, behind eaves, and in other spots even closer to homes and humans. 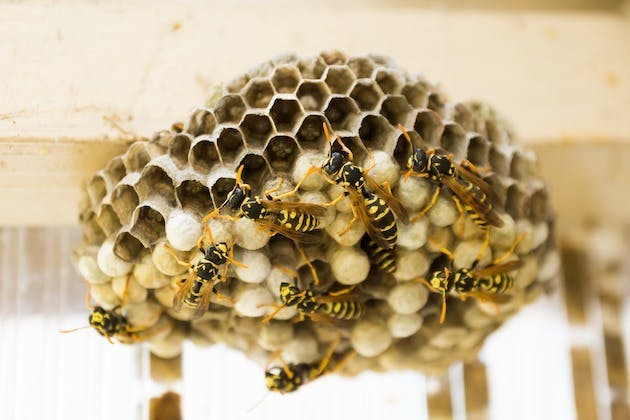 Do wasp nests attract any predators?

Wasps do have predators, and they are occasionally prey to other animal species. Of course, it can be quite dangerous for whichever animal decides to go after wasps or wasp nests because wasps are extremely territorial and will attack anything that goes after their nests. However, certain animal species are either unaffected by wasp stings or have found means to deal with the threat.

To begin with, animals have been known to attack wasp nests. Some of these animals will happily feed on the adults, but many prefer to feed on the larvae. These animals include raccoons, rats, mice, birds, lizards, badgers and bats. people can assault wasps.

Our qualified pest control experts here at Pegasus Pest Solutions can also take care of wasp nests. Whether it's a you who discovers a wasp nest near your house and wants us to deal with the infestation, or you want us to secure your premises and introduce some wasp nest prevention methods, then give us a call on 07501702101, and we would be more than happy to help you.